The world sees so much fighting.  From the beginning there was combat.  Cain killed his brother Abel, after all.  They were Adam and Eve’s kids.

Four people in, and there's fighting.

I have two brothers, and took part in plenty of fighting.  Growing up, my older brother and I fought about everything.  My younger brother and I didn’t always fight, but there was contention.  You live with someone long enough and there will be combat.

Our kids fight at home; it gets physical, with punching and pushing and kicking and pinching and yelling and tears.  I want to run away when they fight.  Their noise jangles my nerves.  Their words hurt my heart.

My husband and I fight.  I say something thoughtless and he reacts.  He is insensitive and I'm hurt.  I complain and he takes it personally.  At the source our solutions are simple: I need to hold my tongue, or he needs to react less strongly.  In every situation, we need to understand each other. 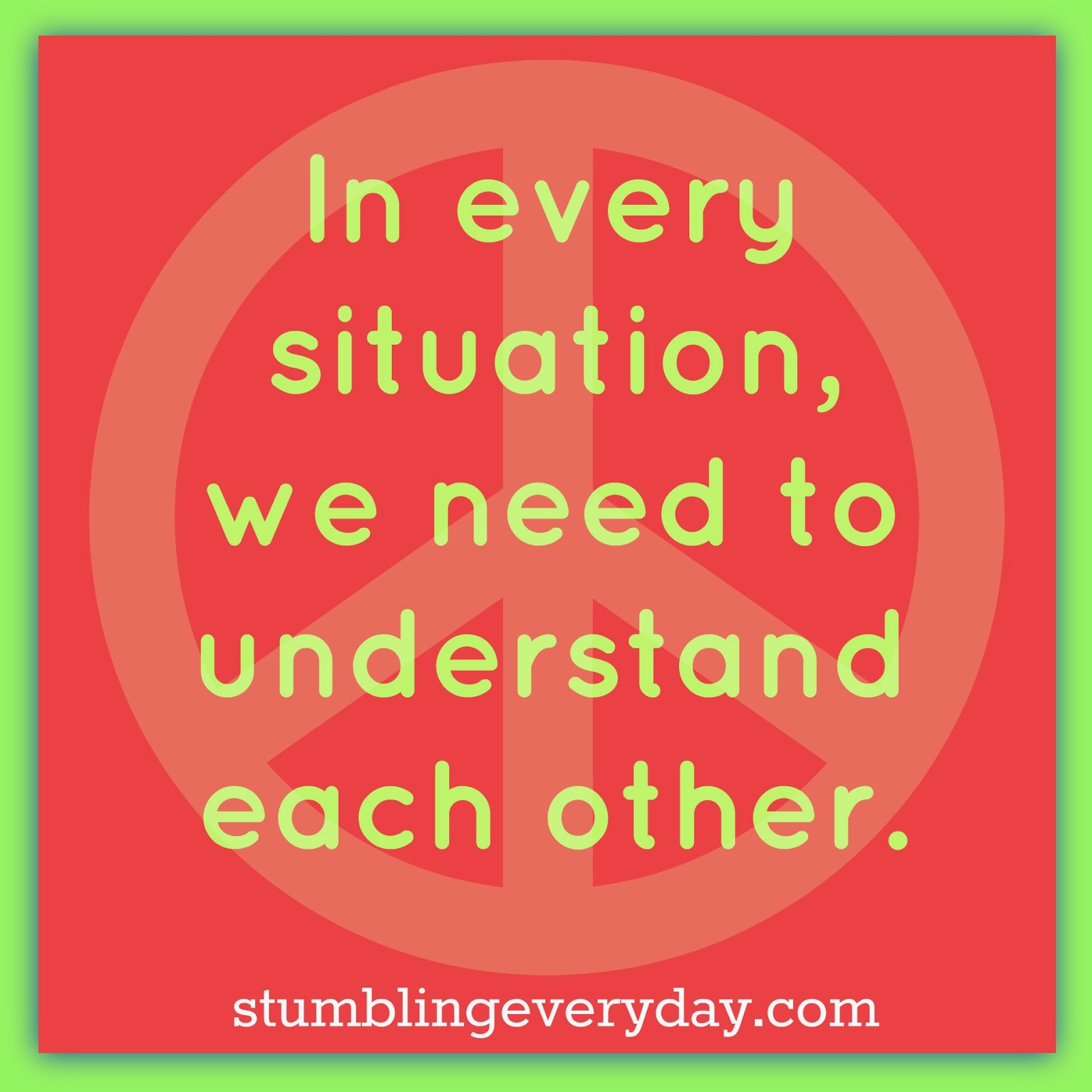 I am not much of a fighter.  I’m soft with age, with mothering.  I try to end it before it begins.  I see things more and more in terms of peaceful opportunities.  I’ve known a lot of people, heard about their hurts and why they fight against the world.  Although made uniquely, at the core we are all the same.  We have the same biological makeup.  We all have good and bad feelings, and we are all created under the same sky and inhabit the same earth.  I believe that we can be at peace, two at a time.  I believe that we can do things peacefully if given the chance.

But life is hard.  We are hurt, taken advantage of, experience violence, dry the tears of loved ones who have been harmed.  We seek revenge.  We hate.  We become willing to fight to the death because of differences in beliefs, nations, skin color, gender, socioeconomics, or lifestyle.  We fight out our differences in the streets, in the courtrooms, in the games arena, on the battlefield.  Violence, like disease, has the power to twist a destiny.  We employ verbal combat every day on the internet.  We never waste an opportunity to fight with someone else because of what we perceive to be wrong, or stupid, or just to unload our frustrations onto an anonymous, unwitting recipient.

We say that we keep guns for protection, but ultimately, we keep them for killing.

It jangles my nerves.  The noise – it’s too loud.  My heart hurts.

I pray to God for peace a lot.  Peace between enemies, peace within people’s hearts.   In the same way I pray for peace in my own home when the noise becomes too much for me to bear, I pray for peace on the earth, between individuals who need to understand each other.

I know peace is unlikely in a grand sense - I’m not that much of an idealist.  I know that this world is sinful and broken.  From the time of Adam and Eve we’ve been faced with jealousy, hatred, and fighting.  There has been war, there is war, and there will be war.

In a shrinking minority of peace-loving people, I am grateful that God is for peace, and that Jesus, the Prince of Peace, came here to pave the way for all of us to enter his Kingdom.  I am grateful that even though our earth is not full of peace, someday it will be.

And that heals my heart a little.

For God in all his fullness was pleased to live in Christ, and through him God reconciled everything to himself.  He made peace with everything in heaven and on earth by means of Christ’s blood on the cross.  Colossians 1:19-21 (NLT)

Since I was a girl I’ve carried a heavy conscience.

When I was young I knew where my parents hid all the Christmas presents.  I dared not snoop, because I was afraid of what my mother told us – that if we snooped she would take all the presents back to the store – but also because I knew I wouldn’t be able to bear the weight of my guilt for peeking.

Okay, I did it once anyway.

The guilt nearly undid me, ruining a surprise and knowing that I had betrayed my parents’ trust.  I didn't confess, but have carried it around with me all these years.

The things I’ve been guilty of since that Christmas knock that small transgression into the atmosphere.  Lying, cheating, stealing, lusting, coveting, envying, judging – have I hit all the wicked sins yet?  I’ve done them all.  I remember them all.  Each one has brought me grief.  Sometimes the grief is immediate.  Sometimes it is latent, brought out again when my defenses are down and I have nothing but time to remember.

Age and love have all but washed my conscience clean, yet still the most egregious sins haunt me.  I inwardly cringe at these ones, sins that I’m sure would turn the love of my most loved into hate, the pardoning of my faults swiftly turning to human judgment, downward looks, whispering behind my back.  Possible loss of relationships.

I would deserve it all, every single speck of it.

But I’ve already been forgiven.

I’ve asked for God’s grace and forgiveness for those sins.   In fact, I’ve asked for it again and again, as if with each petition I would be that much cleaner, that much more forgiven.  My conscience still nibbles at the edges of my mind; the consequence of my wrongs is that my memory of them holds.  I get a reprieve when I’m aware of God’s forgiveness.

But of course that is not how God works.  He doesn’t chip away at our sins.  He wipes them clean.  Once and for all.

God’s reminder that Jesus died for me and every single one of my worst sins is, thankfully, always there.  He will never take back what he has already given.  My heavy conscience is no match for God’s immediate and complete love.  The Holy Spirit lifts my heart and I feel lighter.  He shows me the words and brings Jesus to the front of my mind as if to say: Look.  You have already been cleared of your crimes.  Move on; accept the gift.   Our God is so generous with me, with all of us.

His is a gift that will never be taken back. 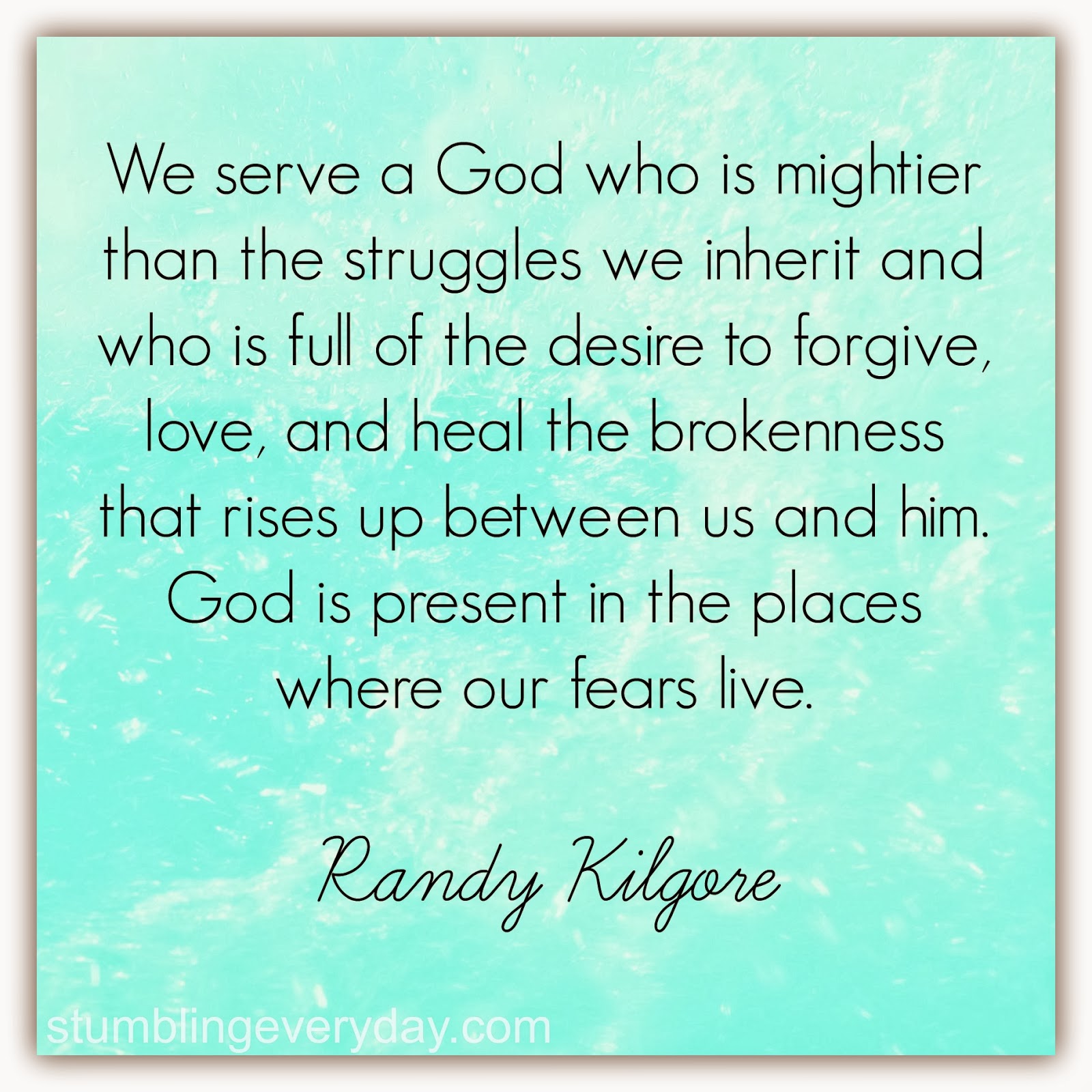 “And by this we know that we are of the truth, and shall assure our hearts before him. For if our heart condemns us, God is greater than our heart, and knows all things.”  1 John 3:16-24 (NKJV)
Posted by Andrea Mowery at 6:19 AM 4 comments:

I am thankful for Jesus’ simple words, his straightforward message.  Not much can be minced in that sentence right there.  Love God, period.  Do it with everything you have.  There are no reasons why, no guidelines.  Just do it.

For a girl like me who manages to make even the simplest message complex, I appreciate clear-cut instruction.

Loving God is easy when things are going our way.  When the world is at my fingertips, when I can clearly see the path ahead and it is smooth and detour-free, it’s easy for me to raise my eyes and hands to heaven and praise God for all that he is.  It’s easy for me to talk about God’s goodness, his gifts, his eternal love.

When the world crashes down around us it’s a different story.

When things don’t go as planned or as smoothly as we hoped, it is harder to love God with all that we are.  When we feel persecuted, when our relationships fall apart, when a friend has betrayed us, when we get sick, when a loved one is sick or dies – then to love God seems like a chore.  Just why hasn’t he delivered me? we may think.  We get indignant.  “After all the time I loved you!” We shake our fists at the sky.

But we are taught to love God with all our heart, soul, mind and strength.  With everything.

Our God is good; there is not a smidge of darkness in his being.  He is light, peace, joy, and salvation.  It becomes easy to love God when we see him from this perspective: for all that he is, not for all that he gives us.

So often I think of God in terms of what he gives us.  He gave us the world, Jesus, our very breath and all the goodness that is contained in our lives.  When I praise God for the gifts he gave me, I feel like a kid at Christmas who is happy when he gets what he wants but would be less so when the gifts aren’t what were expected.

God is always here.  He is most deserving of our love.  We can choose when to love him, and do it only when the good times are here, but that isn’t what he wants.

It may be hard.  It may be unnatural.  But that is his instruction.  He knows what we are capable of.  With him, we can do anything.   Even love him when we’re not sure how to do it. 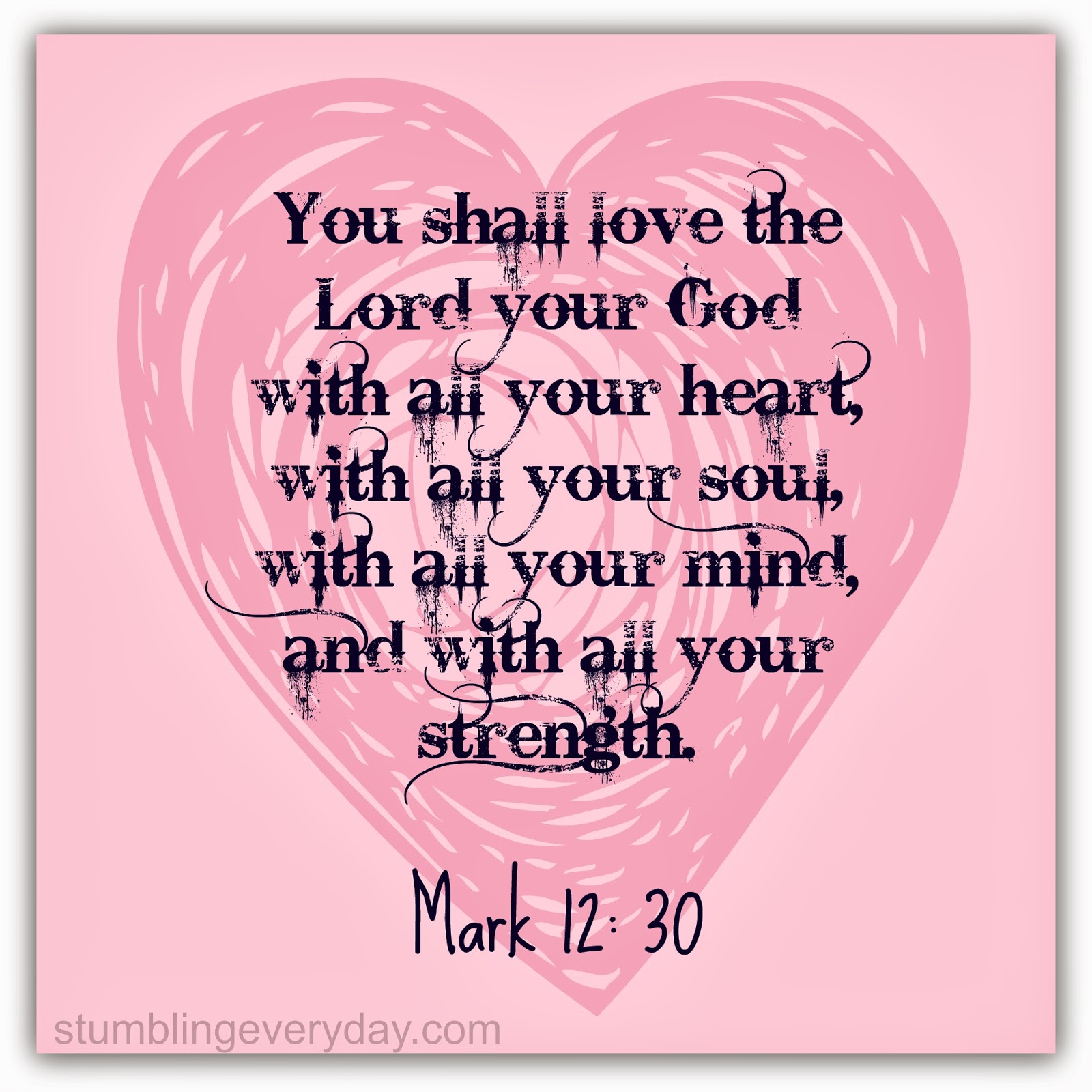