In the middle of the night, when I sometimes wake for the bathroom, a drink of water, a sudden noise, a change in temperature, or for no reason whatsoever, my mind wanders.

It lands on all the things that plague me, the little doubts and worries that pick and poke at me during daylight hours but that are normally dissipated by strong reason and rationalization, confidence and assuredness. When I have all my faculties, and I can clearly choose not to sweat the small things.

It could be a financial concern, a strained relationship, something I said that might be construed as offensive, something coming up that I am not ready to face, all the work I need to do the next day – these are the things that I think of late at night when my mind is open and vulnerable.

Years ago these things would keep me up all night. I would stew and worry and think and think and think – all to no avail. Nothing can be done in the wee hours, no solution carried out while the world is sleeping. The idea that nothing could be done right then would be added to my list of worries.

I realize that Satan parades these things across my mind when I am weak and prone to attack. He preys when I am weak – chooses the parts of me that are exposed – to strike at first.

The realization makes me angry – how dare he do this? I have done nothing to deserve his attacks. I am not in a war here. Why doesn’t he pick on a terrible person, someone who brazenly lives with no shame or fear or conscience, someone who is more easily destroyed because of the choices he or she makes? I’m just living my life, making errors like everyone else – I am not so special.

But I am special. I am God’s child. I am a warrior, even when on my back, groggy and soft and at my most vulnerable.

Satan has picked off the weak already. They are of no concern to him, and easy prey. He will fight viciously for my soul, battling it out in my room – in my mind – in the middle of the night. He relishes the fight, because he knows I am hard-won. If he can get to me, he has won a mighty victory.

In those moments soon after Satan tries to assume power over my mind, I fight back. Not with fists or weapons, but with prayer. I turn from plaguing thoughts and pray to God to take them. I tag in God by throwing at him the cares and concerns that the devil tries to burden me with, and ask him for my next move. And just like that, I am protected.

In the middle of the night, when I am weak, I can still fight. I can summon the name of God and thank him for all he has done. Satan has no power when compared to the power that God wields in my life. God fights for me, alongside me, before me, and after me – I believe this wholeheartedly.

When I eventually fall asleep after Satan's attack, my last thought is on God’s goodness.  My faith is strengthened for another day; this particular battle has been won. 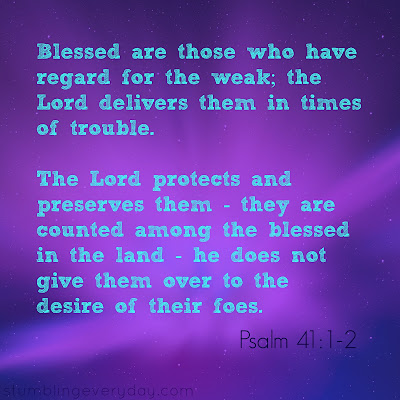 Posted by Andrea Mowery at 9:21 AM