It goes so fast, we say to other parents on the sidelines as we watch our kids do whatever activity they’re doing this season. Just yesterday they were learning to walk.

They are so grown up! we say about their school pictures. So beautiful! So handsome! They were just babies.

In a year they’ll be driving; we will miss this in a year, we commiserate with each other as we shuttle our kids back and forth in endless loops to school, to practice, to sleepovers and to parties. After that, college. And then they’re gone.

Gone. Off to live their own lives, leaving us behind with their youngest years. It’s a wonderful, agonizing thought.

At every stage of life we are given gifts to treasure. If we were born into a nurturing family, there’s one. If we are healthy, there’s another. Have great friends? Another. Time, a job we love, ambition, talent, means to live comfortably, good neighbors, the ability to love, trust, serve, and rest: these all are blessings, that wonderful word that has been given a hashtag to highlight it as the butt of everyone’s joke in recent years.

We are blessed. All of us are blessed in different ways. We might not see it clearly. Sometimes we want more, or something else.

I admit that I don’t always acknowledge what I’m given, don’t always see a gift for what it is. The spoils of a good life (paired with a flawed personality) have led me to struggle with openly accepting my blessings. Sometimes I want more, something else.

Years ago a friend said that as she went about her daily chores, she reflected upon her life. “I thought life was going to be more glamorous than this,” she joked. I could relate. I’m a dreamer, and my job – raising kids, managing a home – is invisible, unappreciated, wholly unglamorous. I feel the weight of “You should be doing more” around my neck every day. Sometimes the weight is light and easily cast off; sometimes I feel as if I am being strangled with it. I know it’s a lie, but it is there.

The more satisfied among us, the ones with a more positive perspective (dare I say the ones who have it right?)  say “I’m doing exactly what I want to do. I have just what I want; nothing more, nothing less. I am blessed.”

I vacillate between admiring these people and wondering how long they’ve been lying to themselves. 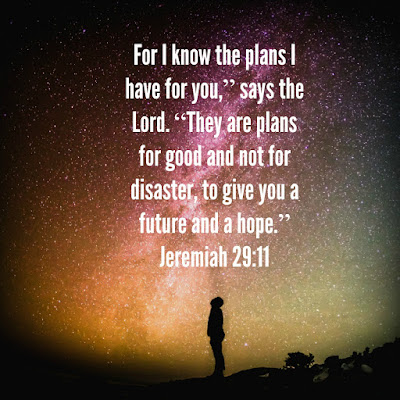 I believe that God works in invisible ways for good as we slog through the details of life. I believe that God has given me a family to take care of so that I stay in the moment and not wish for other things. The blessings of these people I am challenged to take on are bigger than any dream I can conjure; focusing on their care is my main lesson.

Sometimes we have to consider that we are where we’re supposed to be no matter what life looks like. We aren’t missing anything crucial. God didn’t make a mistake with us. Sometimes he blesses us in ways that we don’t see, or we have disappointments that cause us to take another path that is richer and more rewarding.

God is faithful; are we?

I look at my teenagers through adoring eyes. They are tall and strong and smart. They are good people. Nice kids. Caring friends. They make mistakes and have a lot to learn, and it seems they are now learning just as much from other places than at home.

I have spent the majority of my time taking care of my family’s most basic needs: shelter, food, clothing. I have spent a lot of time teaching these tasks to my children so that they may take them when they go. I have also spent a lot of time complaining about these tasks, passing them off, running away from them, and dreaming of how my life would be different if they weren’t mine to do. I wonder how many more times I will look upon those tasks in a negative light. I hope it’s not many more.

This life that God gave me is full of gifts. In selfish moments I wish them away. But like everything from God, they are good; they are my blessings.

Giving – And Given – Freely

I saw him on the road most nights after work. He stood at the end of the off-highway ramp that was my exit for home. He leaned against the stop sign, holding a raggedy piece of cardboard with the words “Please help”.

When I first saw the man, dirty and leathery from spending his days unprotected in the hot sun, I felt a pang of sadness and even a little guilt for not stopping to help. I was in my early twenties after all, not able to spare much that could make a difference, and I was scared too, afraid of what a desperate stranger on the side of the road might do to a naïve young woman who opened her window and reached out her hand. I avoided eye contact and after taking that way home and seeing him many times, like so many other commuters, I ignored the man and his message.

One evening after an early dinner with a friend, I exited for home and, my courage buoyed by the presence of my friend in the car, hit the open window button and reached out to the man who still stood there in the fading daylight. He approached the car, and, seeing the container of food that I offered to him from our meal, waved us away disgustedly. Embarrassment and shame rippled through me – I had money to buy my dinner, why couldn’t I have given him some cash? How arrogant of me to expect that he would lap up my leftovers! I could have bought him a whole dinner of his own, even. But he didn’t even say no thanks.

My friend and I talked about him on the way home. Beggars can’t be choosers, we agreed callously. How rude was he, not even bothering to speak to us? Probably a drug addict, only interested in money for his next fix. He probably had a house somewhere, part of a crew of panhandlers on the highway who made their living taking money from chumps. From that moment on I ignored him when I saw him on the exit ramp, but the interaction still bothered me.

Years later, my husband, who travels for work, experienced a period in his life when people came up to him at different places – airports, usually – and asked for money. Money to help for a specific urgent need was the usual request. We talked about the coincidence of him being singled out by random people. Did you give them anything? I’d ask. He did. The people had good reasons for needing the cash. But my husband said that he sort of felt like he had been duped every time and that he wished he knew that they were using the money for the purpose he gave it.

In the Bible we are reminded that God loves widows and orphans, and takes care of those who live among us and who have no family of their own (Deuteronomy 10:18). He commands us to live generously as well, not being grudging with our giving, but give freely as God has freely given to us (Deuteronomy 15:10-11, Luke 6:30, 1 Corinthians 2:12).

It does not say in the Bible “Give freely, but only if the person is grateful and only if they really need it.” 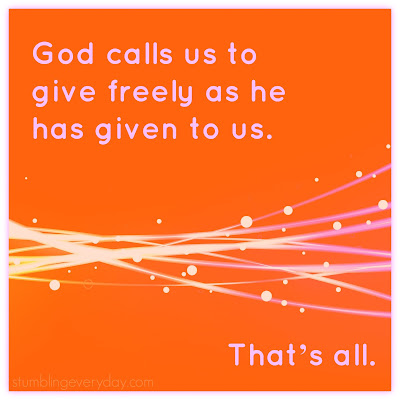 When we give, we are not asked to judge the recipient of our generosity, nor called to put expectations on those to whom we give. We don’t give a birthday gift to a friend and ask them later if they are using it. Our involvement ends the moment the gift is in their hands; we don’t have control over how others use what they are given. If we worry about how a person is using something we’ve given to them, then our hearts weren’t in the right place when we gave the gift anyway. If they misuse the gift, that’s their problem to work through with God.

God could say the same about me. How many gifts have I received from him that I take for granted, refuse to thank him for, see as a burden, ignore, manipulate or squander?

God calls us to give freely as he has given to us. That’s all. It’s freeing to live life in the simple ways he asks us to live. If we can put aside our own encumbrances like expecting thanks or being recognized for a good deed or even knowing that our gift is used well, we can be at peace knowing that we are living the life we are meant to live. The person we help might not thank us, but we are asked to help anyway. This reminder is important for all of us to keep in mind when we give help, time, or resources. The recipient may not receive in the way we expect, but we have done what we were called to do.

And that is enough.

Give generously to the poor, not grudgingly, for the Lord your God will bless you in everything you do. Deuteronomy 15:10 (NLT)

Give to anyone who asks; and when things are taken away from you, don’t try to get them back. Luke 6:30 (NLT)

What we have received is not the spirit of the world, but the Spirit who is from God,
so that we may understand what God has freely given us. 1 Corinthians 2:12 (NIV)
Posted by Andrea Mowery at 7:25 AM 4 comments: